What Can the Customer do to Impact Value for Money of the Assets Procured?

The challenges in government construction

Following the UK Government’s public sector Infrastructure Cost Review of 2010, there was an identified need to reduce the cost of public-sector construction and increase the productivity of the industry. There was no single overriding factor driving higher costs. However, the review identified that higher costs were mainly generated in the pre-construction stages of a project, and provided evidence of a number of contributing factors, including: 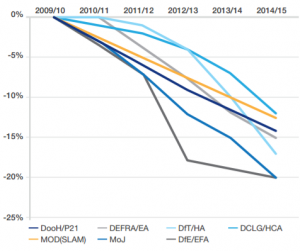 The 2011-15 Government Construction Strategy set out an approach to address these challenges. It called for a profound change in the relationship between public authorities and the construction industry to ensure the government consistently got a good deal, and the country got the social and economic infrastructure it needed for the long-term. It included a detailed insight article of measures to achieve cost reductions in construction, and through these changes, the Strategy helped cut construction costs by 15-20%, and deliver efficiency savings of over £3bn for government-led projects by the end of the Parliament in 2015. Examples of savings in the specific departments can be seen in the graph below.

To set out the long-term vision for the construction industry, the government published the industrial strategy “Construction 2025” in 2013, highlighting how industry and government would work together to put Britain at the forefront of global construction.

In 2016, the latest Government Construction Strategy was released alongside the National Infrastructure Delivery Plan. These both capitalize on the work from the previous parliament and maintain the vision of Construction 2025 for a reduction in cost, a more productive and efficient industry and increased value for money to the public sector.

The priorities within the Government Construction Strategy 2016-20 are designed around supporting government departments to develop their capability as effective construction clients, with a focus on improved collaborative procurement, use of digital technologies, and the use of whole-life approaches to cost and carbon reduction. Some of the approaches are an extension of work commenced within the Government Construction Strategy 2011; others are fresh objectives to enhance departments’ capability to deliver highquality and value-for-money built assets.

The varied approaches within the Strategy create benefits when applied in their own right. However as a combined suite of measures, they are able to deliver far greater impact. The main themes of the strategy are described below.

In January 2015 the UK National Audit Office reported that a culture of late payments to government suppliers was preventing UK businesses, especially SMEs, from investing for future growth. The report highlighted that SMEs generated half of the annual turnover of UK businesses, but they often lacked access to credit and sometimes got into financial difficulties because of late payment by customers.

Within the current Government Construction Strategy there is a continued commitment to transparency and supporting liquidity through the tiers of the supply chain through Fair Payment. The Construction Supply Chain Payment Charter will be re-invigorated over this parliament to extend departmental and industrial commitment to this approach.

One other technique that had been produced to support this outcome was the introduction of Project Bank Accounts. These targeted reduced finance requirement on the tier 2 and 3 of the supply chain by providing increased surety of payment and reduced debt chasing in administration. It was projected that this would in return provide a saving to capital project delivery as overhead and risk was reduced in supply chain pricing. A guidance document was produced in 2012 and to date £billions of capital project delivery in the UK has used this mechanism.

The National Infrastructure and Construction Pipeline provides information on government funded construction projects that are forecast or in progress. Introduced after the 2010 Cost Review, it is designed to provide industry with a clear picture of planned government investment in construction. This transparency increases market confidence and supports industry to invest and allocate resources effectively. Over the last two years the government has worked with industry to improve the pipeline and this has now been published on a dedicated portal: www.uk-cip.org.uk.

The government piloted new approaches to contracts that encouraged early contractor involvement and a greater degree of supply chain integration on the process. The benefit of the integration of the supply chain in a more collaborative contracting environment meant consideration for the operation of the asset could be considered in more detail than previously possible.

Constructing Excellence took a key role in delivering the Trial projects and based on the assumption that the operation and life cycle of the asset was of more value than the design and construction, they set about demonstrating that collaborative contracting involving increased levels of transparency allied to key stakeholder engagement enabled the mitigation of risks and enhancement of opportunity for projects to be successful. There were three separate models trialled, Two Stage Open Book, Cost Led Procurement and Integrated Project Insurance. A summary report will be produced in 2017 to reflect the success of this insight article into standard models of procurement.

Perhaps the highest profile measure of the 2011 Construction Strategy was to set a date to mandate the public sector to procure BIM Level 2 in 2016. Although some of the principles were known there were no standards to adopt which formed part of the strategy to deliver. Over the next four years the standard suite to support the delivery of BIM Level 2 were created and this has become a benchmark globally that underpins international development and adoption in this area.

The BIM Level 2 mandate came into being on 4 April 2016 and the current Government Construction Strategy reflects the requirement for the public sector to increase both the volume and the maturity of this approach across the parliament so it is a business as usual approach beyond. This also, facilitates the foundation for the development of the next digital standard for construction, BIM Level 3. The March budget of 2016 outlined the commitment to this standard and the development of the Digital Built Britain strategy to combine Digital approaches to project delivery and asset management to create a platform for industrial scale change across the built environment enabled by digital delivery.

The purpose of GSL is to champion better outcomes for our built assets during the design and construction stages to ensure value is achieved in the operational life cycle of an asset. The approach was developed following the BSRIA Soft Landings framework and enhanced the aspect of Post Occupancy Evaluation (POE) of the constructed assets to help identify a golden thread of information attributable to the design and construction process that provides the logic for the output of the operational asset.

In the context of the UK Industrial Strategy, Construction 2025 we are in the middle of the change. There is a continued need to enhance, refine and develop our approach to meet those aspirational targets set out.

The next steps are to deliver the objectives set out in the current Government Construction Strategy and assess the measures to deliver Construction 2025 through this parliament. Industry is responding and is supporting UK Government to drive the adoption and approaches outlined here. Most recently the Construction Leadership Council (CLC) outlined its areas of focus to drive industry forward.

There is a continued focus from the CLC on three headline areas to meet the challenges that remain within the sector, digitalization, manufacturing processes and through life performance. This also aligns with wider public-sector agendas of productivity and efficiency, growth and an economy and environment in the UK that works for everyone.